The old relationship between Schiedam and Gävle

Nowadays there is an archival relationship between Schiedam and the Swedish city of Gävle, in the nineteenth century this relationship existed in the field of trade. 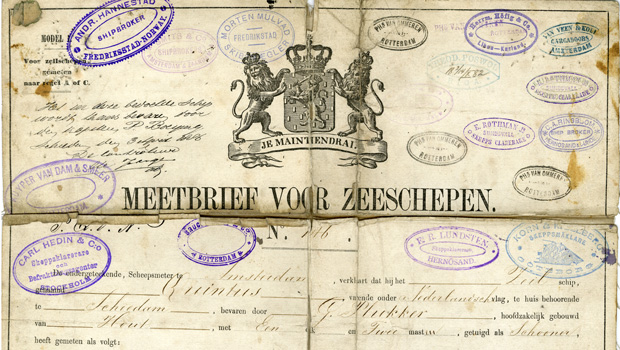 Last year November employees of the municipal archive of Schiedam went to the Swedish city of Gävle to exchange knowledge about digitization of cultural heritage. But more that a century ago ships from Schiedam already went to Gävle to purchase wood.

Curious as archivists can be, Jef Jansen of the municipal archive Schiedam and his Swedish counterpart sought for evidence of previous contact between the two cities. The delegation from Schiedam saw a large amount of ship registers in the archives in Gävle. Finding proof of contact between the cities would be searching  for a needle in a haystack . Eager to find something, Jansen went to work; "First I made a list of all possible records where Swedish data could setups. After searching through the archives I came to the archives of the Chamber of Commerce, which provides an annual overview of ships from all countries which visited Schiedam. That proved out to be it!
It turned out that a ship called 'Quintus' often visited Gävle. Then we also found that we have the company archives of the shipowner, the firm FW van der Elst & Co, and included the ship's papers of Quintus . After more research, also online, I found that there were also ship logs in the Maritime Museum Rotterdam . Which of course I looked into. That concluded the picture."

François Wilhelm van der Elst was born in Dordrecht in 1831 and settled in 1858 in Schiedam. By profession he was a timber merchant and initially he entered a partnership with a mr. Willems, which made him co-owner of the saw mills Wijk den Toorn and De Vlijt.

In 1864 he started on his own account and in 1868 he founded a new company, with the aim of driving trade in cut and uncut wood. The name of the new firm was F. W. van der Elst and Co. In the same year the company had built a new sawmill at the Buitenhavenweg called De Oud-Burgemeester Knappert, named after the mayor who had resigned two years earlier at the age of seventy. This was a wooden, octagonal mill, which gave Schiedam a third sawmill, a windmill that additionally also worked on steam. 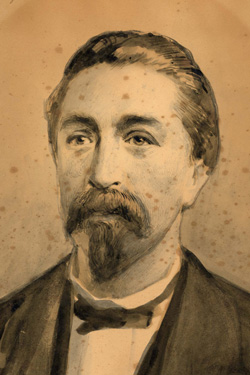 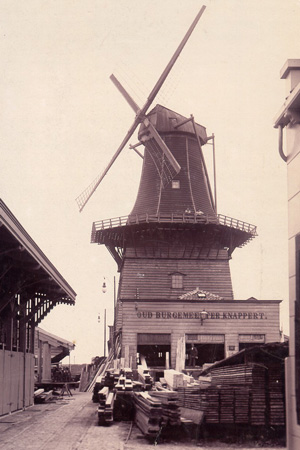 Besides timber merchant and miller, Van der Elst was also a ship owner. The company decided to import wood itself, mainly from Sweden, but also from other Scandinavian countries. In 1874  the company owned three ships, the fourth followed in 1876 and the fifth in 1878. Just like the other ships, this was a sailing vessel, in this case a schooner with two masts. The ship was aptly given the name of Quintus which means the fifth in Latin. The founder of the company though died in 1880 at the age of 48, but the company continued under the existing name.

Two ship's logs of the Quintus have been preserved, in which such things as the number of miles traveled, the watches, the driven orientation, the drift, the wind direction and other events per day were annotated. One of those travels to Gavle began on July 3, 1883, when in Maassluis a pilot came on board to guide the  ship to the North Sea. The ship's crew consisted of six members, namely the captain, the steersman, the cook, a sailor and two ordinary seamen. The charge on the outward journey consisted of coles.
On the night of 4 to 5 July, the ship suffered from incessant winds and high sea, so that when the crew was busy to attach the jib (triangular sail), one shipped a sea and five stakes of the bulwark broke. Also the  grating on which the skipper stood was washed away, after which he rolled back and forth on the deck a few times with the water. After five hours they managed to repair the bulwark, but also the next days the weather was very bad and the ship kept on wobbling on the sea and, even more so, the pump was disfunctioning. After the weather gradually improved, they arrived in Gävle on July 2, were a tugboat towed the Quintus into the port. From 23 to 27 July, the ship was unloaded. 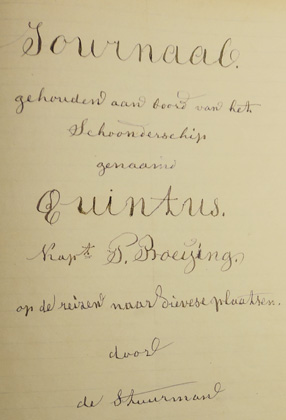 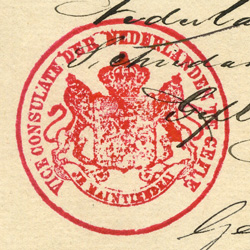 Then the ship was guided by a pilot to the inner harbour, after loading could begin. From July 30 to August 5, the ship was loaded with 5275 abraded trunks and 7809 rough trunks that were stored in the cargo space apart from 1477 rough trunks stored on deck. On the 8th of August finally, there was enough wind to leave again, and on September 6, they came back to Schiedam. The trip had gone so from the North Sea via the Skagerrak and Kattegat, the Baltic Sea and through the Alandshav and the Gulf of Bothnia to Gävle and vice versa.

In the course of time the ownery decreased. As said, there were originally five ships, in 1892 there were only two, and the following year Quintus was the only remaining ship of the company. In 1898, the Quintus visited the city of Gävle for the last time.

Also ships from Gävle visited Schiedam, such as Charlotte, that also imported wood. The Quintus was taken out of service in 1902. Sailing ships were really out of fashion now and it was apparently more profitable to outsource transportation out.

In 1910 also for the mill the wind was no longer necessary. Therefore, the Oud-Burgemeester Knappert was dismantled and broken down to the parapet. This was not the end of the firm F.W. van der Elst & Co. A large part of the twentieth century the company survived until it was taken over in 1967 by timber-merchant Jongeneel N.V.

Sweden and the Netherlands are celebrating four centuries of diplomatic relations. For more information to  www.swe400nl.com